I started reading this book and finished it back in January but I just haven’t had the headspace to do in-depth reviews on books. It’s all I can do to even read a book right now during COVID. The next few book reviews aren’t going to be much but I’m at least documenting that I read it.

I don’t drink Coca-Cola anymore. Too much sugar. But, my grandfather retired from Coca-Cola Bottling and up until about 2 years ago it was all I drank. Well, that or sweet tea. Too much sugar in both of them.

Coca-Cola has a long history and this book is about the man who turned the company around 100 years ago and helped jumpstart the company to what it is today.

I’ve lived in Atlanta for over 30 years so I’m very familiar with the Woodruff name. This story tells why that name is so familiar in Atlanta.

It’s a real one-sided story as the author was one of Bob’s closest friends so you don’t really read any bad stuff. If you are wanting juicy gossip you won’t find it here. He hardly even mentions Bob’s wife so getting to know the feminine side of his story isn’t going to happen either.

The book isn’t bad and his life and experiences were interesting to me I just wish it had been more well rounded. 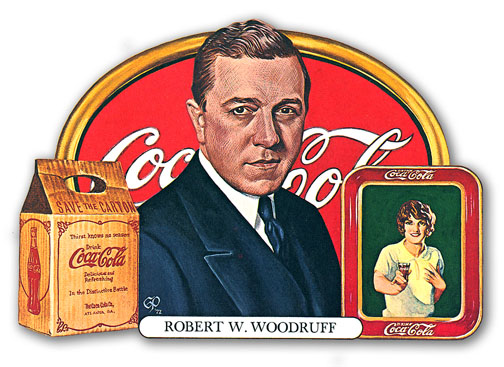 This is a hardcover book with green cloth boards and gilt published with a dust jacket (designed by Bob Russo) by Cherokee Publishing of Atlanta.

Robert W. Woodruff (1889-1985) is best known as the president of The Coca-Cola Company from 1923 until 1954. But he is also known as a generous philanthropist, initially much of it anonymously, hence the moniker, “Mr. Anonymous.” He practiced a lifetime of civic-minded philanthropy and exerted a powerful influence on Atlanta’s business, cultural, and political development in the twentieth century. He left much of his personal wealth to a charitable foundation that today bears his name. This book is a biography of Mr. Woodruff”s life and details many of the gifts to the Atlanta community and beyond.

FROM AN AMAZON REVIEWER:

This biography of Robert Woodruff gives an insiders look at the man that made Coca Cola what it is today. The book deals with the various issues that had to be addressed by this man to take a localized company and make it into an international success. Provides a different perspective on the Woodruff legacy that I have not read in other books about Mr. Woodruff. I highly recommend this book for anyone interested in the history of this influential organization.

Whoever at @oldnavy decided to put pockets on my g

Mom gave me an @allclad waffle maker and @arethaf

I can’t wait to show you my new yoga room. It’

For those of you that have readers on your gift li

Mom made @inagarten’s Creamy Tomato Bisque and i