My husband and I recently went on a quick 48-hour trip to Charleston (Summerville), SC for a family funeral.

While we were there we had a little bit of time to sight see. It had been 15 years since our last trip to Charleston which I’ve decided is WAY TOO LONG. I love this town with every fiber of my Southern being.

We had jumped onto hotels.com and the first thing on the list for Summerville was the Tudor Oaks Inn. One room was left at a great rate and it was close to our family. We love staying at bed and breakfasts. The Tudor Oaks Inn was such a treat!

JoAnn, Terry, and Chloe dog are the Innkeepers and they are very welcoming and hospitable. Their home backs up to the Legend Oaks Golf Course. It is surrounded by old trees dripping with Spanish Moss and has its own private pool. There are 3 rooms (1 king and 2 queens) available. We had the king room and it was wonderfully comfortable with a huge walk-in closet, towels for the pool, bathrobes,  and a private bathroom (with luxuriously large bath towels that spoiled me). There is no cable TV in the room but it does have a Roku to watch shows/movies on the TV.

Due to our travel situation, they were able to offer an early check-in which we greatly appreciated. The Inn is near the entrance to a quiet neighborhood and we never heard a sound other than that of golf clubs hitting the golf ball while we were sitting by the pool. There is plenty of room in the house if you want to spread out and read, work on your computer (free WiFi), or just relax. We could come and go as we pleased.

Breakfast at the Tudor Oaks was wonderful each morning. JoAnn had a great setup on the kitchen counter of various muffins, croissants, butter, jams, gluten-free granola, yogurts, cereals, fruits and hard-boiled eggs. There was plenty to eat. She had a Keurig coffee machine and a hot water kettle so we were all set for a good breakfast both mornings. 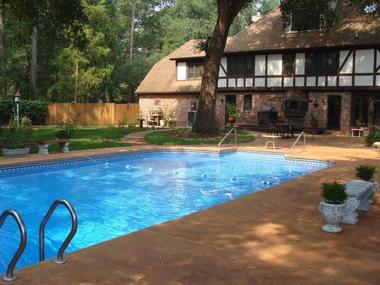 Friday night we went to dinner at The Watch Rooftop, a farm-to-table restaurant at the top of The Restoration Hotel in downtown Charleston, about 20 miles from where we were staying. It’s the city’s highest rooftop restaurant and had a great view of the historical buildings, church steeples, and the Ravenel Bridge. It was a hot one that night so we sat inside (which still has a great view) until a large group came in next to us. We then moved outside where we could talk to the family we had not seen a while and enjoy the evening since it had cooled down a bit.

The restaurant and bar were what I’d call Southern nautical chic. Quite lovely and comfy. Great service. We had the ham and cheddar hush puppies (I could have eaten a gallon of them), the swordfish special, and the shrimp and grits (made with Geechie Boy mill grits). Totally outstanding. The shrimp and grits leftovers were good for breakfast the next morning too!

The funniest thing about the dinner was that we had a run-in with a reality TV star. We don’t really watch a lot of TV much less reality TV. But, my husband has gotten me hooked on Southern Charm on Bravo. Yes, you read that right. The husband got me hooked. It’s his guilty pleasure I guess but I love it too. Season 5 is currently finishing up on TV.

On the way to Charleston I said to him wouldn’t it be funny if we ran into one of the stars from the show. Well, we did. Charleston wasn’t crowded that night and the restaurant wasn’t busy but as we were enjoying appetizers a large dinner party of about 15 people came in to sit at the table next to us. They slowly started filling up the tables and then in walks Naomie Olindo. Husband’s mouth dropped and he beamed at me and said, “It’s her!” He thinks she is the prettiest on the show. And I’ll just go ahead and say that she is far prettier in person. The table was full of young 20-somethings dressed beautifully Southern. I was super jealous of the outfits. Later on, as we left the place they looked like they were having a heck of a good time. I couldn’t get my husband to go up and talk to his girl. Guess he was shy. But let’s just say it made his night!

We enjoyed a walk for a few blocks around Charleston but it was getting late and everything was closed and we were tired so we just went back to the Inn. Maybe one day I can afford to stay at The Restoration. It certainly was beautiful………….and expensive!

On the agenda for Saturday was Middleton Place and Drayton Hall. Two items on my historical bucket list. It was the weekend before July 4th so Middleton Place was having special events depicting Revolutionary War life. We stopped there first. More photos and video can be seen on my Facebook page.

Middleton isn’t what you would normally think of when you think about an early 18th-century Southern rice plantation. It’s not white columns and porches. The house you see above is just 1 of 3 houses that were originally on the property. We also took a tour of the 1 slave house on the property and the Beyond the Fields exhibit. Now I had read some reviews that said this exhibit about the slaves was whitewashed and some said it wasn’t. To be honest I can’t really give my opinion. It was so hot that day that I just couldn’t spend as much time there as I wanted to read everything and watch the documentary. There was one place, the photo is on my Facebook album, where it listed all the slaves the Middleton family owned. It definitely put things in perspective for the sheer amount of people this family bought, worked, and sold.

Middleton Place was absolutely stunning. It’s set on the Ashley River and between the well-manicured gardens, the home, the stables, the farm life, the rice planted, and the massive amount of land we wore ourselves out in the summer heat. We had to duck into the mill house for about 30 minutes to escape a summer shower. We didn’t run into any alligators they warned us about. I can’t even imagine living and working there in that heat day in and day out. I won’t even mention the skeeters!

At that point, there was no way my feet were going to take me to Drayton Hall. I was beyond done. We’ll just have to make that trip another time along with Magnolia Plantation. Maybe when it’s cooler.

We were so exhausted that after visiting family late that afternoon we didn’t want to leave the Inn. We simply changed into our swimsuits, called for Famulari’s Oakbrook pizza delivery, and ate dinner by the pool with 2 beers.

Sunday morning we came home. It’s really not a bad drive from Atlanta. We took the back roads from Augusta to Summerville and back which provided for some lovely views of the small town south and farming fields. Near Augusta is Redcliffe Plantation which I’d love to see as well.

It’s not every day you see a school bus full of watermelons. I could have stopped him and just opened one right there by the side of the road!

And I saw many old homes I’d love to own and restore.

And who knew this was where Petticoat Junction was?

Whoever at @oldnavy decided to put pockets on my g

Mom gave me an @allclad waffle maker and @arethaf

I can’t wait to show you my new yoga room. It’

For those of you that have readers on your gift li

Mom made @inagarten’s Creamy Tomato Bisque and i

We love @yellowbirdsauce sriracha so now we are go